It looks like Google is silently removing the option to send peer-to-peer transactions via Google Pay Send from its apps in the US. This follows the complete shutdown of the P2P service in the UK. For two of our tipsters, the option to send and receive money from friends via the Messages app has been missing for a few days, and now a Google support page has surfaced that confirms that the functionality is being stripped from the Assistant, Gmail, and Contacts, but it has returned to the latter mysteriously. Either way, you’ll likely only be able to use the Pay app to move money to friends in the future.

Google being Google, the removal of the Pay feature seems to be a work in progress. A tipster tried transferring money via Google Assistant on his phone, and while he stopped short of approving the transaction, the UI suggests that payments are still possible. The same action wasn’t available on his Chromebook, though, so it looks like something’s up.

Similarly, while the Pay feature initially disappeared in Google Contacts for our tipsters, it seems to be back for many with the latest update to the app — even though the changelog still explicitly says that the feature is gone, as you can see in the screenshot above.

The situation should actually be clear cut when it comes to Assistant, Gmail, and Contacts, as Google states that the feature is removed from these services in its support document. With this documentation in place, it’s likely just a matter of time until the feature disappears from all of the mentioned apps. 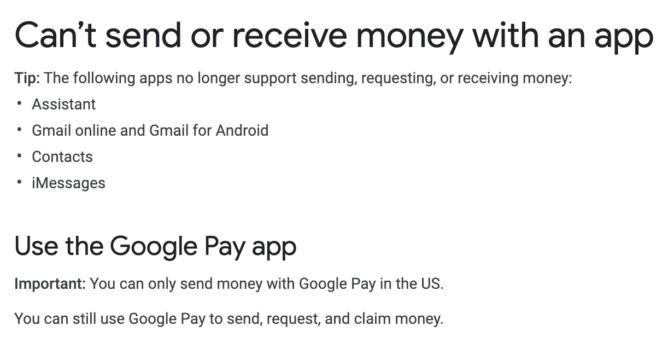 Since Messages is not mentioned in this support document, we’re not sure if the removal of Pay from that app is a bug or not. No documentation seems to point at an official retraction, and there’s still an active help page that explains how you can use Messages to send money. However, a support thread on the issue has been opened where multiple users complain about not being able to send money via the text app, and a seasoned forum member in contact with Google confirms that the functionality has been removed, so it might just be a matter of time until Google updates its documentation.

We can only speculate why Google would remove Pay Send from its apps. Maybe the company wants to streamline the transfer experience to make the Pay brand more prominent, only allowing you to use the app to send money. It would make sense to promote the Pay name more aggressively if Google really wants to turn it into a shopping portal, as rumored. With the UK shutdown of Pay Send in mind, it’s also possible that Google wants to get rid of the platform altogether.

We’ve reached out to Google for more information and asked about further details regarding the return of Pay Send to the Contacts app.

Updated to reflect that Pay Send has returned to the Contacts app for some people.

What Comes Next: How Tech Helps Transit Open Safely